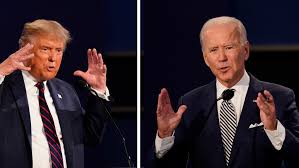 This blog was published by Duck of Minerva Link

For those of us who study leaders’ personalities and how they affect their actions while in power, President Trump has really been a blessing, if well-disguised.  For many of his opponents, turning a corner on the Trump Presidency is not just about changing his policies but also quieting his persona, removing the centre-stage megaphone of political office from the hands of a man feverishly keen to use it (even when actually feverish).  The gregarious and agreeable Joe Biden – perhaps average, risk-averse, and vanilla to his detractors – will surely be different. We wanted to be sure.

How different is Biden from Trump?

We profiled Biden during the 2020 primaries, analysing over 206,000 words in his speeches, statements, and interviews. We compared this to a previous personality profile of Trump in 2016 (by Walker, Schafer and Smith). Both analyses are based on material from primaries when neither candidate was president, making them as comparable as possible.  These profiles were generated by a content analysis of leaders’ rhetoric using a computer program to score several key personality traits and core beliefs (for more, including how valid this method is, see Schafer).  Here is what we found:

Biden is much more cooperative in his approach to others, seeing more value in using rewards and promises.  Candidate Trump talks a great deal about punishing others. Overall, Biden believes more in the use of moderate tools of policy; Trump sees value in using more extreme instruments.

While both are not optimistic about accomplishing their goals, Trump is much more pessimistic than Biden. In terms of their personality traits, both are distrustful but Trump really corners the market here, scoring wildly higher than other US presidents, and much higher than Biden. Trump is also far less task-oriented than Biden, motivated to focus on his political relationships compared to Biden’s more balanced approach.

Biden and Trump are, perhaps surprisingly, similar in other respects.  Both believe the international system is a hostile rather than friendly place.  They are both fairly risk-averse, and see value in using threats.  In terms of their complexity of thought, both tend toward more simple, black-white thinking.  Both value wielding power over others.

We know from previous research that leaders’ personality characteristics can be remarkably stable across time and the ascension to the presidency may not change core beliefs.  It is, however, worth asking whether focusing on primaries’ speeches and statements might be influencing our findings.  Do candidates talk a certain way, have a certain public persona, in primaries?  Maybe.  Candidate Trump and candidate Biden both stand out from the average profile of sitting U.S. presidents in a number of ways.  Candidate Hilary Clinton was also ‘more extreme’ on many personality characteristics compared to other presidents (see Walker, Schafer and Smith).

But there are reasons to believe that Biden’s candidate profile does give a glimpse into what a president Biden’s personality might look like.  Even though there may be a ‘primary effect’, it does not affect all candidates the same way.  There are still significant differences between Trump and Biden.  The primaries also do not generate a ‘party personality’ – candidate Clinton shared some personality characteristics with fellow Democrat Biden, but in other ways she was more like Trump or completely different from either of them.  We also scored the first Presidential ‘debate’ in September 2020 separately to see if that format would alter our findings, but the differences between Biden and Trump were essentially the same.

What would Biden do differently?

Assuming that this comparison of Biden and Trump as candidates tells us something about lasting personality differences between them, what would that mean for a Biden presidency?  We see two main ways their leadership could diverge.  First, given that policies often follow from core beliefs, how Biden deals with others is likely to differ.  Although Biden too sees the political world as fairly conflictual, his approach is much more conciliatory and cooperative than Trump’s.  In short, we are likely to see more carrots and fewer sticks.

Second, Biden’s management style in the White House is much less likely to be president-centred and loyalty-focused.  Trump’s very high level of distrust shows in his hypersensitivity to criticism and suspicions about the motives of others.  Leaders high in distrust make loyalty the litmus test for keeping people around them and often have high turnover in advisors, as we have seen with Trump.  This is reinforced by Trump’s focus on how well he is liked and revered, rather than on policies and political achievements.  We might see some of these tendencies in Biden as president, but in much less extreme forms.  From our profile, Biden is likely to create an advisory system that is more policy-focused than Trump’s, moving the government toward goals, and more inclusive of different opinions.  Biden is also likely to select and keep advisors for reasons of competency rather than fealty to the president.

We know from years of extensive research that leaders’ beliefs and personality traits can significantly influence their policies and decision-making.  While presidential elections may not often be decided by personal characteristics, given both the differences and similarities between these two candidates, voters might be wise to take a closer look at their personalities and what they imply about how they would each govern.